How I Stopped Muskrats from Getting into my Boat Exhaust Port

Here is my encounter with far too many Muskrats. The manufacturing of my product couldn’t come soon enough, to combat these vermin. Here is my story:

Not sure if you heard yet, but I have had some Muskrat problems.

Early this year I had started to design an adjustable Muskrat Guard for exhaust ports. As busy as I was this summer, between work and play, I

somewhatdropped the ball but picked that ball back up a few weeks ago. I was just about there with a prototype, but a day late.

I had taken my boat to Harbor Town last Saturday and had left it there for Capt. Niemo (John) to pull on Monday. Well, I had gone back down there on Sunday to do some minor end-of-the-season work and while in the engine room I heard some noises. After a quick review, I blew it off as the boat was rubbing against the dock. The following Tuesday night Capt. Niemo called me and said he was walking by the starboard side of my boat, now in the shed, and had heard some scratching from inside the boat. I told him I would be there the next morning. In the meantime, I had devised a long hose with strips of an old rug attached to this hose in order to shove in the exhaust port so the rodent could de-port (no pun intended). Got there early Wednesday morning only to find the Muskrat had already eaten through an exhaust coupling. Looked for about 3 hours in the engine compartment with no luck in locating it. In the meantime, we had heard another noise coming from the port side exhaust. Yup, now there is 2 of them. Needless to say, I was growing sicker as time ticked by and my mind wondered on the thoughts of all the damage that these things can do, then die and smell.

He got his 22cal., w/bird shoot, located the rodent and wasted him.

I ran to Menard’s and got a live trap, set it up with peanut butter, and headed home. A couple of hours later Capt. Niemo called and said the muskrat had de-ported the port side and was running around in the building. He got his 22cal., w/bird shoot, located the rodent, and wasted him. Then he checked the engine room and found a huge muskrat in the trap. That one to hit the dust! The trap is reset just in case there is a third.

I have ordered a new exhaust coupler at $135 and will install once it arrives and then re-launch “Solvation” for a damage control/check. As you know, these things eat just about anything, including wire, hoses, etc. My hopes are that they were not in there long enough to damage too much.

Just wanted to share the story as this scared the shit out of me and wanted to let everyone know it can happen. My Muskrat Guards should be available shortly!

P.S. Your boat insurance does not cover damage caused by vermins. 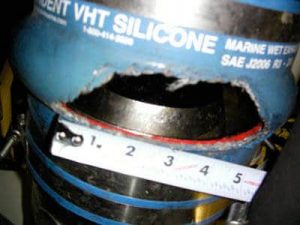 Just want to update you on the Muskrat (aka Water Rat) situation.

During the install of my Muskrat Exhaust Guard (prototype), I noticed a foul smell of death coming from my port side exhaust. Yep, the third one never made it out. I hope to re-launch on Friday to check that all systems are working as well as to purge any remains. I think I have enough furs now for a winter hat and gloves. Anyone want them? Be great for a x-mas present.

Now it is up to 4 muskrats that came aboard. Two in the port exhaust and 2 in the starboard. The last one came from the starboard side in which they had eaten through the exhaust coupler. I found this one on the pavement just outside of the storage building a week or 2 back. He had gotten into the bilge and eaten a hole in the fresh air screen on the port side and then jumped to the pavement and broke his back (about an 8′ drop). He didn’t make it very far.

I then launched the boat, checked all systems, and started up the MANN’s to purge the dead one. Sure enough, he popped out. Took the boat out for about 45 minutes just to run everything. Returned to Harbor Town and left the engines running till the lift was ready to pull me. In the meantime, I saw another muskrat swim by. If I had a gun I would have used it!

The boat is back in the shed and finally laid up for the winter. Muskrat guards are just finishing up the R&D stage and will be ready for the retail market shortly.

Make sure to Protect your Investment! Get a Muskrat/Otter Exhaust Guard today!

Sign up for our email list and we’ll send you occasional updates about specials and tips for outfitting your boat.